Samsung Galaxy Tab S6 Lite is a stripped-down version of the Galaxy Tab S6, which the South Korean electronics maker launched last year. Priced Rs 27,999 onwards, the Lite variant costs somewhere in between the price points of the iPad mini and iPad, and seems to be an affordable proposition in the large screen tablet segment for work, online classes, entertainment and more. But is it? Let’s find out: 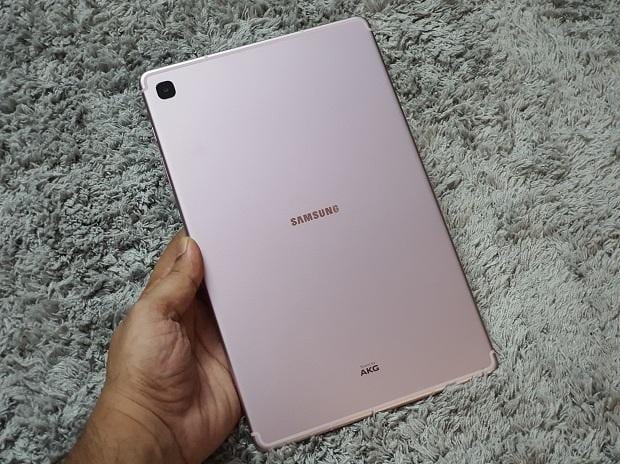 Like the Galaxy Tab S6, the Lite version has minimal design and good ergonomics. It is thin and lightweight, and boasts a proportionate metallic construction. In vertical orientation, the slate’s power key and volume rockers are on the right side of the frame. These buttons might not be easily accessible in some situations but, nonetheless, they do not obstruct the usage in any way. On the back, the tab has a single camera module featuring an 8-megapixel sensor. There is a 5MP camera on the front for selfies, which doubles up as a face recognition module for screen unlock mechanism. The face recognition works quickly and unlocks the device in seconds. It somehow makes up for the absent fingerprint sensor. The LTE variant has a SIM slot on the left side, you can use it to make calls and and send messages. 
The Galaxy S6 Lite has a 10.4-inch LCD screen with fair bezels around it that provide a good amount of space to hold the device without accidently touching the screen. Though the screen lacks the punch that AMOLED panels offer, its fullHD+ resolution (2000 x 1200 pixel) makes it a decent one for everyday use. The screen has good colours and sharpness, and it seems well equipped for reading and internet browsing. However, the contrast is not great and multimedia content based on colour rich profiles does not look appealing on it. Brightness is another issue that limits the screen’s sunlight legibility and renders it useless in bright environments, especially for texts and multimedia. The Lite variant boasts the AKG-tuned speakers, however, it gets only two of them compared to the quad speaker set-up on the Tab S6. Nonetheless, the speakers are loud and have good audio feedback. In the audition, they boast decent volume levels and speech clarity. The speakers might be loud but not enough to keep you entertained in noisy environments. The Galaxy Tab S6 Lite comes with a SPen Bluetooth stylus for doodling and scribbling jobs and it complements the Tab’s overall utility by a huge margin. It works effortlessly and makes the slate a decent device for work and fun. The stylus magnetically sticks well to the edge of the tab. We tried painting on PENUP and the result was fairly good

The Galaxy Tab S6 Lite is powered by Samsung Exynos 9611 system-on-chip, which is a mid range processor that you mostly find in Samsung’s M-series and A-series smartphones. The processor seems weak and the Galaxy Tab S6 Lite struggles handling multitasking and processor-graphic intensive jobs. Imaging is another weak area but that is okay, considering most tablets in the sub Rs 30,000 segment struggles to get right optics. That said, the camera set-up seems decent for video calls and conferencing.


On the bright side, the Tab S6 Lite has a good on-battery time. The Tab’s 7040mAh battery keeps the show going for around a day after moderate usage, which included streaming ‘Bulbul’ on Netflix, a few episodes of ‘Arya’ on Disney Hotstar, an online video session for a short course. The battery, however, takes its own sweet time of over three hours to charge fully.


Unlike the Galaxy Tab S6, the Lite version does not have Samsung DeX computing platform. Therefore, its utility is limited to that of a tablet. The Galaxy Tab S6 Lite is an expensive slate, which could have been an ideal big screen device if it had the Samsung DeX computing platform and power-packed performance. In its own capabilities, the Tab S6 works great for online classes, scribble and doodle, and entertainment (with a few fixes). However, there is not much you can do on this tab due to the weak processor and lag in performance. Put in the extra money and go for the Galaxy Tab S6, which makes a better proposition ideal for work, fun and everything else in between.