Samsung Galaxy M51 specifications have allegedly been spotted on a Google Play Console listing. The smartphone is going to be launched in India soon and has already appeared on Amazon. Samsung India has also teased the smartphone through a video on Twitter. Reports have suggested that the handset will debut in the second week of September. Looking at leaks and teasers so far, the smartphone is likely to carry a massive 7,000mAh battery, a quad rear rear camera setup, and an Infinity-O display with hole-punch cutout located in the top-centre of the screen.

As per the alleged Google Play Console listing, spotted by MySmartPrice, the Samsung Galaxy M51 will feature an octa core Qualcomm Snapdragon 730 SoC coupled with an Adreno 618 GPU and 8GB of RAM. A previous report claims that the phone will come with a Snapdragon 730 SoC. However, a contradictory report, citing known tipster Sudhanshu, says that phone will have the Snapdragon 730G SoC, which is optimised for gaming.

When it comes to the screen, the alleged listing shows the Samsung Galaxy M51 sporting a display with 1080 x 2400 pixels resolution. While the exact dimensions of the display are not known, a report has claimed that the phone might feature a 6.67-inch full-HD+ Super AMOLED panel with a standard 60Hz refresh rate. The listing also says that the phone will run on Android 10, and interestingly, the phone’s image in the listing matches the one teased by Amazon and Samsung India. 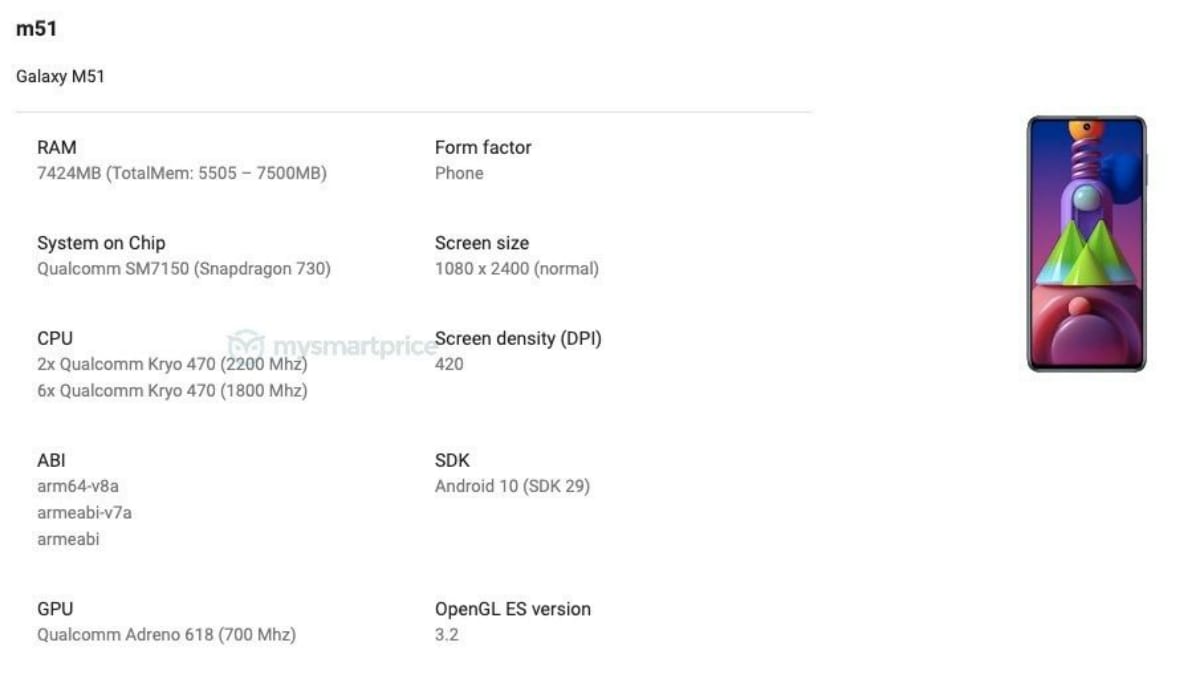 The Samsung Galaxy M51 will come with an Adreno 618 GPU.
Photo Credit: mysmartprice

The microsite created by Amazon shows the Samsung Galaxy M51 sporting a hole-punch cutout at the centre of the display. Further, earlier this week, a 23-second video teaser shared by Samsung India on its Twitter handle showed the phone with a quad rear camera setup along with an LED flash module. Since there is no visible fingerprint sensor on the back, it is safe to say that the smartphone may have an in-display or a side-mounted fingerprint sensor. Further, the teaser confirms the presence of a Qualcomm processor and a Super AMOLED Plus display.

The Amazon listing has also teased other specifications through a short quiz in which it has ‘hinted’ the participants to ‘think meanest, think monstrous’ and choose an option given below the questions. For example, a question “What will be the battery capacity of Samsung Galaxy M51, the #MeanestMonsterEver?” has four options 6,000mAh, 5,000mAh, 6,500mAh and 7,000mAh. Going by ‘meanest and monstrous’ logic, the phone could sport a 7,000mAh battery with a fast charging technology.

In the camera department, the Samsung Galaxy M51 will feature four snappers on the back. While the resolution of the sensors is not yet confirmed, a report suggested that the primary camera may sport a 64-megapixel sensor, which could be coupled with a 12-megapixel wide-angle snapper, a 5-megapixel depth sensor, and a 5-megapixel macro shooter. According to a recent report by news agency Indo-Asian News Service (IANS), the smartphone could be priced between Rs. 25,000 and Rs. 30,000 in India.

Will OnePlus 8 series be able to take on iPhone SE (2020), Samsung Galaxy S20 in India? We discussed this on Orbital, our weekly technology podcast, which you can subscribe to via Apple Podcasts or RSS, download the episode, or just hit the play button below.